1.Container leasing giant: container shortage will continue for 4 months until 2021

In recent months, the global distribution of containers has been severely uneven, with serious shortages in some regions and a serious backlog in some countries.

Both Textainer and Triton, the world’s top three container equipment leasing companies, said that the shortage of containers will continue in the coming months.

According to the container equipment leasing company Textainer, it is difficult to restore the balance between the supply and demand of containers before mid-February next year, and the shortage of containers will continue until after the Spring Festival in 2021.

After announcing the abandonment of the Damco brand last month, Maersk completed its first air freight charter contract. On October 19, Maersk officially announced on the official WeChat account that it would be involved in air transportation.

On October 11, Maersk provided a number of charter flights for a tire manufacturer, transporting goods from Thailand to Japan for the first time.

3. South Africa has the highest rate of cargo theft in the world, and truck freight is the most serious!

A report released by the leading international transportation and logistics insurance company TT Club and the global supply chain intelligence provider BSI found that the COVID-19 pandemic and the effects of the blockade and economic recession have increased the risk of cargo theft in South Africa.

In addition, in the report of BSI in February this year, freight trucks were already mentioned as the main target of theft. 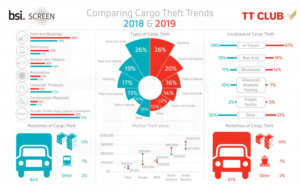